During the initial climb, at an altitude between 100-200 ft agl, the engine sputtered, then lost all power. With about 1,700ft of runway to go, the pilot entered a right turn, and the aeroplane impacted the ground left of the runway, resulting in substantial damage to the right wing, the left horizontal stabiliser, and left elevator.

Post-accident examination of the aeroplane found that the right fuel tank contained no fuel, and the left fuel tank contained about 20 gallons. The fuel selector was found in the left tank position. It is likely that, during the accident sequence, the pilot moved the fuel selector to the left tank position, but the aeroplane’s low altitude at the time of the loss of power provided insufficient time to restore fuel flow before impact.

The circumstances of the accident are consistent with a total loss of engine power due to fuel starvation as a result of the pilot’s mismanagement of the available fuel.

Contributing to the accident was the pilot’s decision to initiate a 180° turn following the loss of power despite the runway remaining.

Comment Aside from the rather ‘run o’ the mill’ fuel management error, the pilot’s acceptance of an 18 gallon fuel imbalance with almost nothing on one side at take-off, meant they were effectively only giving themselves a ‘single’ tank option for the duration of the flight. Risky enough in its own right, but it ultimately meant there was no room for error when it came to managing the remaining fuel.

The attempted turnback only made the outcome worse when a straight ahead option apparently existed. Don’t assume, check!

The pilot reported that, during landing, he elected to go-around because of an overshoot of final and an unstable approach. The pilot applied full power, raised the landing gear, and initiated a climb out. At the same time, the pilot-rated passenger inadvertently raised the flaps prematurely, which caused the aeroplane to settle onto the runway with the landing gear retracted. Once the propeller contacted the runway surface, the aeroplane veered off to the right of the runway and sustained substantial damage to the fuselage.

Comment The pilot was an extremely experienced ATPL and instructor and in his narrative he says he ‘asked for full flaps’ on the approach. It may just be that they were in ‘crew’ mode and when it came to the go-around the co-pilot felt it was his job to raise the flaps.

Having nearly been caught out in a similar way, I know it does happen but in this case a density altitude of some 6,000ft left no margin for recovery. As the pilot candidly comments, ‘a better pre-landing brief is recommended’.

The pilot reported that he was attempting to land, at night, on an unlit grass airstrip. The pilot landed to the right of the runway by about 10ft. During the rollout the right wing hit a small tree and separated partially from the fuselage at the wing root, resulting in substantial damage.

Comment A not entirely surprising outcome. There is, after all, a time and place for everything and this was probably neither the time nor the place for trying this. I suppose it’s a reminder that seeing in the dark is difficult.

The pilot reported he had just departed from the airport and saw a family member working in an adjacent field and decided to perform a fly-by.

While performing a low-level left turn over the field, he felt the left wing dropping toward the ground. The pilot immediately applied full right aileron, at which point, the left wing began dragging on the ground.

Comment Remarkably, the occupants were uninjured in this impromptu ‘fly-by’. Legalities aside, most impromptu acts in aviation
end badly.

Astute analysis by the pilot, though, in which he stated that ‘if he had been higher, the accident would not have happened’.

The Corby CJ-1 is a homebuilt single-seat, fixed-wing aircraft with a 340kg maximum take-off weight. The pilot was operating from his home strip at Bluebutts Farm. The pilot estimated the strip length at 278m. The strip was surrounded by higher ground and was sloped, so Runway 02 was only used for take-off and Runway 20 was only used for landing. The wind was from 200° at six to nine knots.

The pilot had been flying for an hour which had included a practice stall and some ‘touch-and-go’ landings.

He was flying an approach for a final landing on Runway 20 when he reported encountering sinking air very late on finals. He applied full power and he believed that he would clear the boundary wall.

However, the aircraft struck the boundary wall, knocking over a section of it, and causing significant damage to the airframe. The pilot was seriously injured. A witness and the pilot’s wife assisted the pilot and drove him to hospital.

Comment While the strip clearly presented its challenges the pilot had more than 300 hours on type and was presumably familiar with the site. Even so, the decisions taken on that final approach left him with nowhere to go but down when sink was encountered.

It is always tempting to make that last approach ‘bang on the numbers’ but sometimes those numbers need increasing a bit to keep a margin of safety. Although, not a decision ever taken lightly when the strip is short.

Having pushed the aircraft into position for starting, both occupants boarded the aircraft and the pilot commenced the pre-start procedures using the aircraft checklist. After the engine was started, the aircraft was taxied for take-off, backtracking the runway. Once the pilot was happy with the position, both pilots noted that there was a glider on finals so the take-off began without delay.

The pilot had missed the final power check, which required the engine to be run at full power and a check of the maximum rpm to be performed to confirm that the propeller was in fine pitch. The pilot described the aircraft as sluggish on the take-off roll and, as the aircraft approached the half-way point of the runway, he checked that the airbrakes were stowed, and the rpm was within normal limits as he was expecting to be airborne by this point.

Seeing the yellow winch caravan at the end of the runway approaching, the pilot called out his intentions to abort the take-off and stop. The passenger in the right seat called out that he had control and the pilot let go of the controls.

Shortly afterwards the aircraft became airborne, although it was immediately clear that it was not climbing away as expected. The aircraft reached approximately 100ft agl before beginning to descend. The pilot called to the passenger, who was now flying the aircraft, that there was a suitable field to their left.

The aircraft banked left but struck a tree with the right wing as it descended. It turned through 180° before pitching down and striking the ground nose first. The canopy flew open and forward, and both occupants were able to vacate the aircraft without injury. The aircraft was extensively damaged. The take-off had been attempted with the propeller in coarse pitch leading to a significant loss of performance.

Comment This is one of a number of recent accidents which remind us that a proper engine power check serves to confirm more than just mags, carb heat and prop functionality. It also helps confirm fuel flow/selection, mixture setting and prop pitch, and tends to leave most of the ‘levers’ in the right place for take-off. All of which should get a final check prior to take-off, of course, but in this instance a rushed departure may have compromised those checks. As an aside, despite best intentions, the (un-briefed) takeover of control removed the handling pilot’s option to abort which might well have been achieved safely. 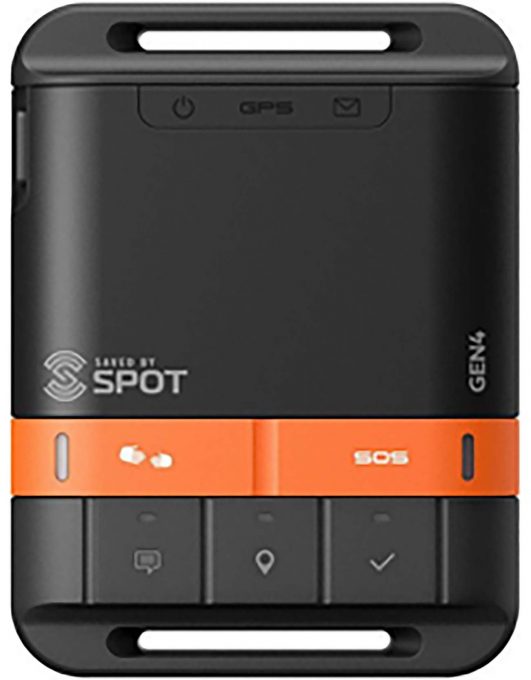 I was thinking of bringing a ‘SPOT’ of levity to this month’s Safety Kit. It is Christmas after all! Despite the SPOT range of devices being used the world over for emergency messaging when operating beyond GPRS contact, it also has a tracking function. Yes, that means Santa can be tracked leaving the North Pole if he had one of these devices mounted on his sleigh!

More than that, though, if you have a bit of a ‘following’, which may be no more than your own family, why not velcro one of these to your coaming so you can be tracked on your adventures around the Highlands and Islands. And, should anything go wrong, you are pretty much guaranteed to get assistance, wherever you are. There is a 12-monthly contract for around €12/month but also one month only plans for €15. So why not give Santa a gift this Christmas!