In a right bind!

After exiting the aeroplane, the pilot attempted to rotate the right wheel assembly but it would not turn. After about an hour the wheel assembly freed up and was able to rotate.

A post-accident examination of the brake system revealed that the brake master cylinder lock seal spring had broken into three pieces. Given this information, it is likely that the broken lock seal spring washer prevented the master cylinder from releasing pressure from the caliper. This malfunction resulted in the right brake caliper staying engaged after the pilot released the brakes.

Comment This is quite a nasty failure and a tricky one to mitigate. It is probably the case that on most occasions, by the time a binding brake is detected it is almost too late to do much about it. If the option is available, choosing a crosswind from a more favourable quarter might help and giving yourself more landing space by picking a wide unobstructed runway and landing to one side are some of the things that spring to mind. Plan for the worst!

Left in the dark

The pilot then reached down to configure the radio and when he looked back outside to the left, he saw one row of two blue taxiway lights. However, he did not see the other set of taxiway lights to the left of the set he initially saw and believed that what he saw was the first row (north side).

He immediately applied left rudder input to turn but the aeroplane suddenly stopped, as the aeroplane had exited the taxiway ramp and impacted a drainage culvert. The aft section of the fuselage was substantially damaged.

Comment This was another costly distraction and a reminder that, particularly in the dark or in conditions of poor visibility going ‘head down’ even for a short while is risky and needs to be done as part of a visual ‘lookout scan’.

The pilot reported that, during the landing roll in the experimental amateur-built aeroplane, the heel of his shoe became caught on a protruding floorboard bolt and the aeroplane veered to the left. The aeroplane exited the left side of the runway, impacted a Visual Approach Slope Indicator light, nosed over, and came to rest upside down. The aeroplane sustained substantial damage to the rudder.

Comment With winter now here it can be tempting to go flying in more substantial footwear than might otherwise be the case. Integration of clothing into cockpits is worth giving some extra thought as safety reports are littered with incidents of footwear, sleeves and headsets snagging on bits of structure and ruining an otherwise great day out!

The pilot reported that he took off from his private airstrip and flew for about 30 minutes before landing at a nearby airport for fuel. After fuelling with 24 gallons, he did not perform a pre-take-off run-up of the engine and departed the airport.

About 1.5 miles from the airport the engine sputtered and lost all power. The pilot performed a forced landing to a small field. During the landing roll as the aeroplane was approaching the end of the field, the pilot applied heavy braking which caused the aeroplane to come to rest on its nose. The aeroplane sustained substantial damage to the left outboard wing.

The pilot reported that after the accident he sampled the fuel from the wing tanks and gascolator. The fuel sample from the gascolator was about one-half water and one-half fuel. The wing tank samples contained all water.

The pilot provided photographs of the airport above ground fuel tank including photographs of the interior of the tank. The tank interior showed a large amount of rusted metal in the bottom of the tank. The airport manager reported that the airport fuel tank was about 30 years old and was of double wall construction. Water had entered the space between the inner and outer walls of the tank and the inner tank had rusted allowing water to enter the inner tank and fuel supply. The tank did not have filtering on the outlet.

The airport ordered a new tank and planned to include filters on the outlet, including a water separating filter.

Comment: This is a salutary reminder to us all that fuel is not always stored in the most reliable of conditions. That said, either an engine run-up pre-take-off or a water drain check should have been enough to identify the contamination.

During a cross-country flight, the pilot and a passenger in the rear seat unbuckled their seat belts to try to retrieve items behind the pilot’s seat. An adult passenger seated in the front right seat, who was unfamiliar with the side-stick controller in the aeroplane, grabbed the side-stick while adjusting their seat. The pressure on the control stick caused the aeroplane to violently climb and descend three to four times before the pilot was able to regain control.

Comment It is hard to imagine such a serious outcome from what was quite an innocuous beginning. Moving seats (intentionally or otherwise) in an aircraft while airborne can have really dangerous consequences but few could have imagined this sequence of events. A lesson to us all and a reminder to constantly supervise a front seat occupant.

The pilot reported that, while departing from the off-airport, snow-covered glacier, he was not comfortable with the acceleration of the tailwheel-ski-equipped aeroplane and aborted the take-off. He then began a back taxi and allowed the aeroplane to make a wide radius turn. Subsequently, during the turn the aeroplane dropped vertically into an unseen crevasse. The aeroplane sustained substantial damage to both wing lift struts.

Comment Hats off to all those who embark on this kind of pioneering flying! And I would love to know what the pilot’s ‘takeaway’ was from this accident. For my part, I shall be sticking to pre-recced sites for my take-offs and landings!

Too much screen time

The pilot reported that the aeroplane was at 5,000ft and an engine power setting of 5,000rpm when he began to pitch and roll to practice a chandelle. At the start of the control inputs for the manoeuvre, he looked down at his kneeboard and personal electronic device and readjusted its position on his leg and around the control stick.

The pilot advised that during this time, he may have released the back-pressure on the control stick but continued the turn. While focused on the kneeboard he heard the engine rpm increase, then looked up and realised that the aeroplane had entered an unusual attitude.

At the same time, he became disoriented and tried to correct visually, instead of by reference to the instruments. As such, he inadvertently increased the rate of descent and was unable to determine the aeroplane’s position as it rapidly gained airspeed.

He then heard a ‘pop’ sound and deployed the aeroplane’s ballistic recovery system (BRS). The BRS system’s parachute deployed successfully, and the aeroplane came to rest in trees without its left wing.

Comment It is good to see open and honest reporting from this reasonably experienced (circa: 950hr) pilot who holds a Commercial and Flight Instructor Certificate. And it’s good to see that a BRS almost certainly saved his life. So far so good but becoming distracted by an iPad and a kneeboard during a wingover to the point where you lose control is worrisome. This was a CAVOK day and recovering to level flight on instruments would not necessarily have helped. A good call for some ‘Upset Recovery’ practice? 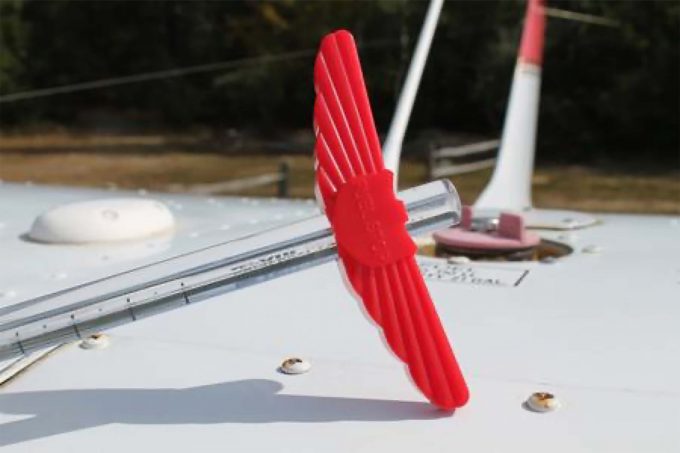 Safety reports are always littered with accidents resulting from fuel exhaustion or poor fuel management so with stockings that need filling over the coming weeks (a little early for Christmas perhaps, but good to be prepared), it may be a good time to put on your safety hat and ask Santa to bring you a fuel tank dipstick!

They can, of course, be fashioned from all sorts of raw materials but the selection from Fuelhawk has stood the test of time.

They are widely available from suppliers such as Pooleys and Transair and suit all tank sizes.

Just make sure you get the Fuel Stop adaptor as well or you will spend all your time fishing the dipstick out of your tank!