A British electric aircraft project, the Sherwood eKub, has made its first flight.

Test pilot and Associate Professor of Aviation at Cranfield University, Guy Gratton, explained, “After two years of work on the EnabEl, (Enabling Aircraft Electrification) programme, we hit a major milestone and flew our first aircraft, the Sherwood eKub.

“The first flight was 39 minutes, including slow and fast taxying, low hops, and finally 10 minutes of continuous flight.

“Later in the day I made a second flight, 34 minutes long, 22 minutes of which was airborne, and in which I reached 2,000ft and 80mph (not at the same time, this isn’t a high performance aeroplane!).

“Absolutely everything worked, although inevitably this was all very ‘initial”‘flying, with much expansion and research to be done in the coming months. 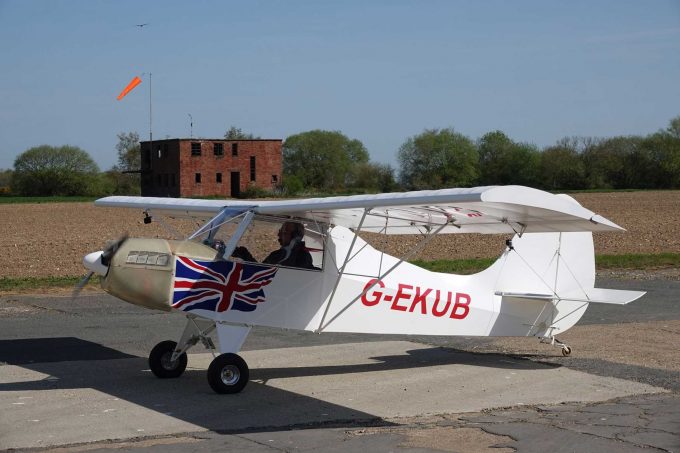 Guy taxying in the Sherwood eKub

“This was a fantastic team effort.

“The aircraft was built by The Light Aircraft Company (TLAC) at Little Snoring, Norfolk, led by Paul Hendry-Smith. At Cranfield University we provided project management, electrical engineering (and me as test pilot). A lot of the battery technology has come from CDO2 led by Gary Kendall. Aldo heavily involved is Flylight led by Paul Dewhurst (who is well on with build of the second aircraft, the electric SkyRanger Nynja).

External support has come from the British Microlight Aircraft Association’s Technical Office and the CAA.

“I also have to acknowledge the dialogue with my colleague Rein Inge Hoff in Norway, and as always the informal advice available through The Society of Experimental Test Pilots, Society Of Flight Test Engineers and Royal Aeronautical Society. 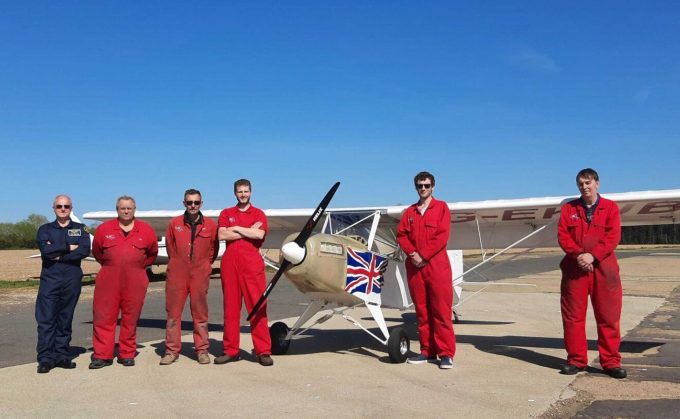 Some of the team working on the Sherwood eKub electric project

“So what’s this all electric aeroplane like to fly? Well obviously, she’s first and foremost an aeroplane – ailerons, rudder, elevator and stick all work much like anything else. However the powertrain certainly behaves like neither a jet nor a piston engine.

“Whilst not silent, vibration is very low and mostly from the propeller (despite this aircraft actually having no anti-vibration mounting on the main motor). Interestingly what vibration we get is least at highest flight speeds – don’t understand that yet.

“Thrust available shouldn’t vary much with height (that’s the theory anyhow, but I need to get somewhat above 2,000ft to prove that!), but it does depend upon battery state of charge (SoC) – ground tests indicate that a full cold battery will have about 20% more power available than a warm nearly flat battery.

“A parameter I’ve been calling TAFT (Time at Full Throttle) matters a lot, due to a combination of factors. Power available drops off the longer you’ve been at full throttle. In ground test that was by around 10%/minute, although in flight test, most likely due to better forced cooling, nearer 3-4%/minute, which is more acceptable.

“There are some obvious implications of that to visual flying, such as predictability of flightpath in trying to clear obstacles.

“Other features are a prop that can stop when you close the throttle! and non-trivial EMC issues – the radio wasn’t happy!”

The project is funded by Innovate UK through the Future Flight Challenge Initiative.