Cotswold Airport (aka Kemble) has taken delivery of one of British Airways’ retro-livery Boeing 747s after the jumbos were retired from BA’s fleet last year.

The B747 is G-CIVB, finished in the Negus paint scheme.

“The aircraft landed here on the 8th of October and since then has had a small initial team take stock of her engineering state,” said Christian Ackroyd, Operations Director and Aerodrome Manager.

The Airport has also removed the economy seats to sell and help fund the aircraft’s upkeep), and purchased a ground power unit and specific set of airstairs.

“She can still run on her APU and the aim is keep all her systems functioning, less engines, as part of her attraction on display,” continued Christian.

“As you can imagine, lots of work continues to ensure the aircraft safe for public ground use, including removal of the activation devices for the door rams and emergency exit slides, as well as potential hazards, such as the on-board oxygen systems.

“Once in place, this aircraft will form centre stage for a growing collection of privately owned classic jet aircraft on site, including the Bristol Britannia, The Buccaneer Aviation Group, the British Phantom Aviation Group, not to mention the Boeing 727 lovingly kept in order by Mark Gregory of ASI and the Hunter, Gnat and two Canberra PR9s owned by the Airport. 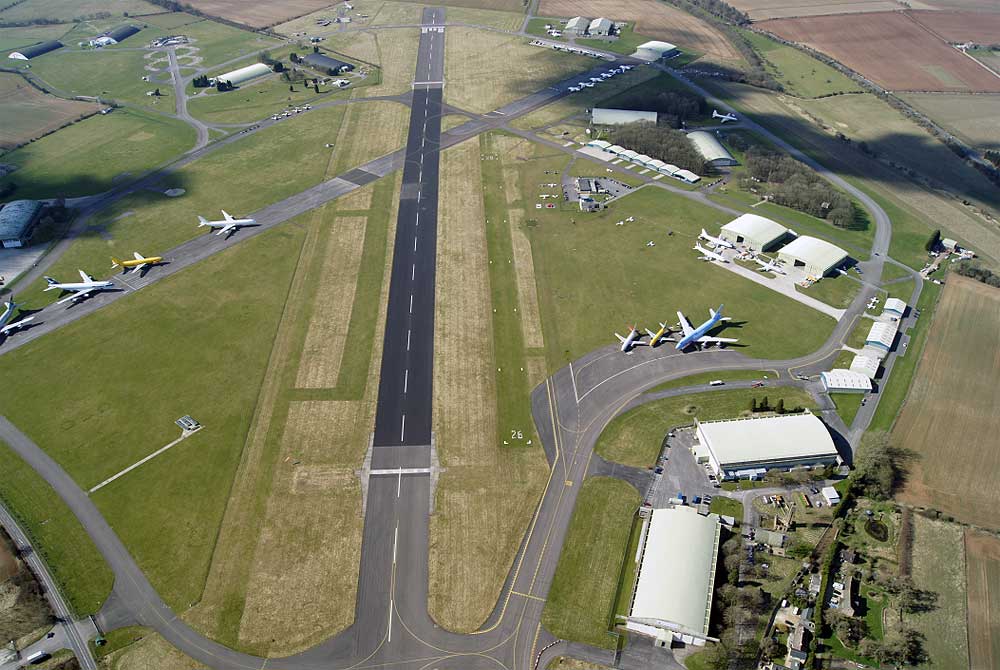 Main runway at Cotswold Airport is to be resurfaced this year and a new GPS-based instrument approach approved. Top: Former BA Negus livery B747 now retired to the Airport.

Cotswold Airport has also reported that its Airspace Change Proposal (ACP) for the design of our new all-weather Instrument Approach Procedures (IAPs) was recently approved by the CAA and is now in the Implementation Stage.

Christian again, “I believe the ACP was a great success and model for how CAP1616 community engagement should be followed in an honest and transparent way.

“All communities, from GA, Gliding, other Airfields and, of course, our local community were actively engaged at all stages, from development of design principles through to the final approved designs.

“The IAPs use what is called Required Navigation Performance (RNP), which is the new term for a GPS based approach. Each runway will be served by an instrument approach.

“We aim to conduct the flight validation very early this year and publish (through AIRAC) our updated AIP entry in late March, although much of this is intertwined with issues caused with leaving EASA, so I will not state a ‘flyable’ date just yet.”

“We aim to explore both increasing our business jet offer (with the introduction of our new IAPs) and investigate how a GA airfield can strive towards carbon neutrality and harness renewables, as specified in the Government’s 2050 Aviation plan,” said Christian.

The Airport is also to have its main runway rehabilitated/resurfaced in 2021.