After troubleshooting the system and several unsuccessful attempts to extend the main landing gear, the pilot performed a gear-up landing to the dry asphalt runway, with only the nosewheel extended. The aeroplane slid 500ft before coming to a stop. It sustained substantial damage to the right horizontal stabiliser and elevator.

Comment This is a reminder that post-engineering check flights don’t always go as planned, and that it pays to be alert for the unexpected.

It is not apparent that ground runs and leak checks were carried out immediately prior to the flight but they may have helped identify the loose union. It is also worth double checking other movables too, such as switches and seat positions etc., to ensure that after maintenance work they are where you expect them to be!

The pilot was turning the engine through when it started unexpectedly.

He attempted to get back into the cockpit to shut the engine down but was unsuccessful. The aeroplane self-taxied in an arc and struck the hangar before coming to a stop, and it sustained substantial damage to the right wing.

The pilot noted that the magneto switch was in the BOTH position when he checked it after the accident, and he did not recall turning it on.

Comment These incidents continue to occur and it is good to read that no one was injured this time round.

Perhaps the pilot was treating the propeller as ‘potentially live’ and that saved him but why not also check the switches, levers and brakes are in a safe position as well as make sure there are some chocks in place, before ‘pulling the engine through’?

The pilot of the low-level pipeline patrol flight reported that after about one hour into the flight, a ‘very loud pop’ noise emitted from behind the instrument panel followed by an unidentified high-pressure air/gas release into the cabin. After not seeing any flames, the pilot opened his window to vent the cabin and decided to conduct an off-airport emergency landing on an empty multi-lane highway.

During the landing rollout, the left wing impacted a metal road sign, and the aeroplane came to a stop on a grass median. It sustained substantial damage to the left wing. A post-accident examination revealed that a high-pressure air conditioning hose failed and separated at a metal crimp connection at the firewall pass-through. The hose ends at the separation showed signs of age deterioration. Maintenance records revealed that the hose had been in service for about 20 years, accumulating 12,500 total hours.

Comment We could argue all day as to whether an off-field landing was the right decision in this instance but at least the occupants walked away safely.

The fractured hose required inspection annually, or every 600 hours, whichever came first. The omission to spot signs of a pending failure could have had a far worse outcome than a bent wing from the ‘precautionary’ forced landing that the pilot elected to carry out.

From bad to worse

The pilot reported that, during landing he inputted 10° of flaps and placed the aeroplane in a slight crab with aileron input to compensate for the crosswind.

Just before touchdown, the right wing lifted, and the aeroplane landed hard with a side load on the left main landing gear. It then veered to the left and travelled into a dirt area between the runway and taxiway.

The pilot applied full throttle to abort the landing, however the aeroplane would not climb. It sustained substantial damage after it struck a parked aeroplane and fuel truck. The left wing separated, and the aeroplane came to rest inverted.

Comment There have been a number of unsuccessful go-around attempts from pilots following a departure from the runway strip. It is doubtless difficult to override the desire to attempt to get airborne again, but doing so may just add kinetic energy to the eventual crash site and further endanger those on board and nearby. Not an easy evaluation to make in the heat of the moment, though.

The private pilot was on short final approach for landing to the grass runway. The south end of the runway was bordered by an east-west oriented road. Witnesses on this road, and dashboard camera video from another vehicle, confirmed that the aeroplane was flying about 5ft above the ground when it collided with the front left side of a westbound truck. The aeroplane became lodged on top of the truck and they continued off the right side of the road, through a ditch, and came to rest in a residential front yard.

“The aeroplane became lodged on top of the truck”

The pilot and driver were both fatally injured during the accident sequence. There were several propeller slash marks on the front left side of the truck, consistent with the propeller rotating during the collision. There was no evidence of tyre skid marks on the road and none of the witnesses reported any evasive manoeuvres by the aeroplane. Therefore, it is likely that neither the pilot nor the driver was aware of the impending collision.

Additionally, there was no roadway signage warning of low-flying aircraft.

Comment A number of us operate from airfields close to roads, tracks and footpaths, and many of our small airfields are unfenced and potentially accessible to the general public so this accident is pertinent to us all. Signage is helpful but ultimately being aware of the threats and looking out for conflicts is likely to be the only practicable way to operate.

While en route, at about 700ft agl the engine lost all power. He made an emergency off-airport landing to a heavily forested area and the aeroplane impacted several small- to medium-sized spruce trees. The aircraft sustained substantial damage to the wings and left lift strut.

The pilot stated that after the accident, he found the mixture control arm had become detached from his previous temporary repair, and it was in the closed position. Additionally, he noted that he made a poor decision to fly the aeroplane with a failed mixture control cable.

Comment There is probably an incentive to make a temporary repair when stuck in the wilds of Alaska, but the real mistake came from not considering the ‘what if’ of that repair letting go. As the pilot found to his cost, the failure of a repair to fuel related components almost inevitably ends up with a loss of power and all that follows on from it. 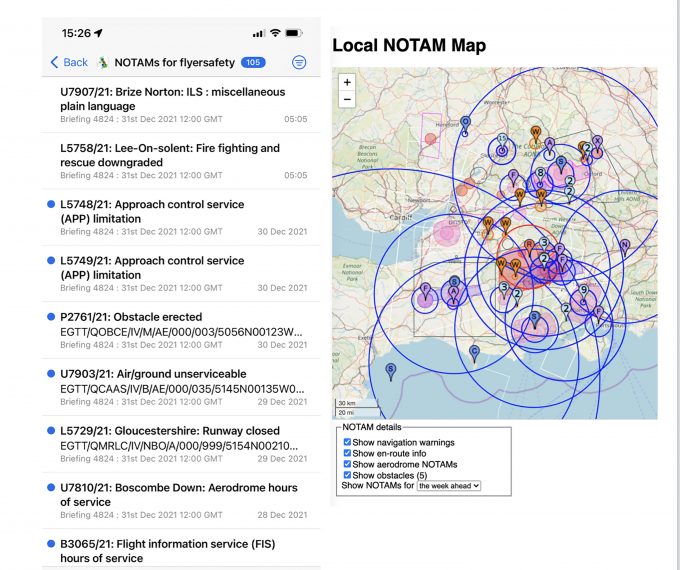 I recognise I might be a bit late to the party with this month’s Safety Kit as there are apparently 29,000 registered users of Notam Info, but it was while reflecting on the Analysis piece that I went looking for a Notam ‘visualiser’, which might prevent me stumbling into a newly issued restriction.

Of course, the likes of SkyDemon should flag up every Notam as it becomes active, but late changes can be missed when scanning the whole route or an operating area.

With Notam Info, however, you simply set up your flying ‘area of interest’, subscribe to an RSS feed and ‘Bingo’ you can read back over the latest Notam issued by NATS directly on your phone as you arrive at the airfield. Notam Info does much more, of course, but this is a really ‘neat’ feature.