Flight Design: no new aircraft because of Ukraine war

No new aircraft will be delivered by Flight Design until October this year at the earliest because of the disruption to its Ukraine manufacturing base.

The Russian invasion of the south and east part of Ukraine includes the city of Kherson where Flight Design’s facilities are located. Although staff are unhurt and the factory is still intact, Flight Design cannot get new materials in or out.

The German company is building capacity at its base at Sumperk in the Czech Republic, which already has EASA Production Approval, and expects to start delivering new F2 aircraft in October.

However, no date has yet been set to restart production of the long-running – and best-selling – CTLS which is fits both the light sport aircraft and 600kg microlight categories. More news on CT production is likely in July this year.

For the time being Flight Design is concentrating on manufacturing spare parts and supply, as well as technical support to keep the existing worldwide fleet flying. The company is also running a donation scheme to help Ukraine staff and also to help any staff fleeing the conflict and arriving in Germany.

This year, 2022, should have been completely different with more than 80 confirmed orders for the CS-23 type certified F2 two-seater. The company is continuing to work on the IFR version of the F2 with expected EASA certification in 2023. A Night VFR version is expected later this year. Already, the US is showing more interest in the certified IFR version than VFR. 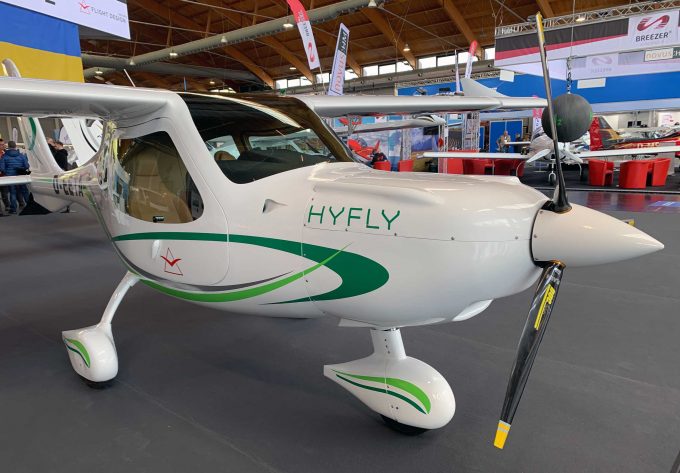 Flight Design is taking a two-pronged approach to electric power for the F2. Its own project is the F2e, powered by a 75kWh battery, with a target of EASA certification in 2024/25.

However, it’s also working with HYFLY on a hydrogen fuel cell system. A demo aircraft on display at AERO – complete with a hanging hydrogen molecule to emphasise the point –with a large under fuselage air intake to cool the fuel cell.

HYFLY is a project by two German companies, Kasaero and PS-Hytech, to develop and produce a fully integrated fuel cell system for aircraft that’s light, long range, zero emission and costs less to install and operate than conventional power systems.