+VIDEO That’s it – pilots are redundant. The US Air Force Research Laboratory and a company called Dzyne have successfully completed a two-hour flight of a Cessna 206 single-engine aircraft flown by a robot pilot, nicknamed ROBOpilot.

The full title of ROBOpilot is Robotic Pilot Unmanned Conversion Programme and the flight took place earlier this month at Dugway Proving Ground in Utah, USA.

“Imagine being able to rapidly and affordably convert a General Aviation aircraft, like a Cessna or Piper, into an unmanned aerial vehicle, having it fly a mission autonomously, and then returning it back to its original manned configuration,” said Dr Alok Das, CRI’s Senior Scientist. “All of this is achieved without making permanent modifications to the aircraft.” 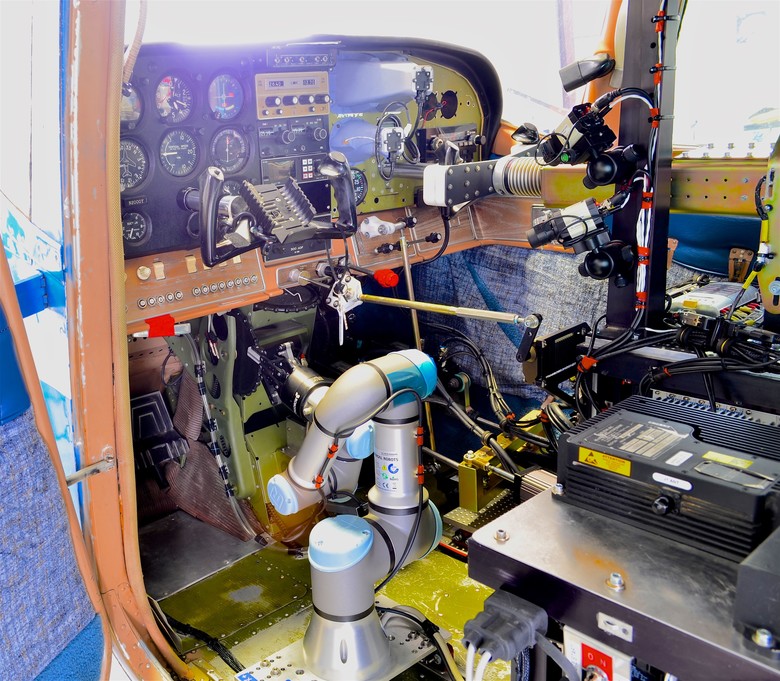 ROBOpilot interacts with an aircraft the same way as a human pilot would. For example, the system ‘grabs’ the yoke, pushes on the rudders and brakes, controls the throttle, flips the appropriate switches and reads the dashboard gauges the same way a pilot does.

At the same time, the system uses sensors, like GPS and an Inertial Measurement Unit, for situational awareness and information gathering. A computer analyses these details to make decisions on how to best control the flight.

ROBOpilot is easily installed: remove the pilot’s seat and install a frame which contains all the equipment necessary to control the aircraft including actuators, electronics, cameras, power systems and a robotic arm.