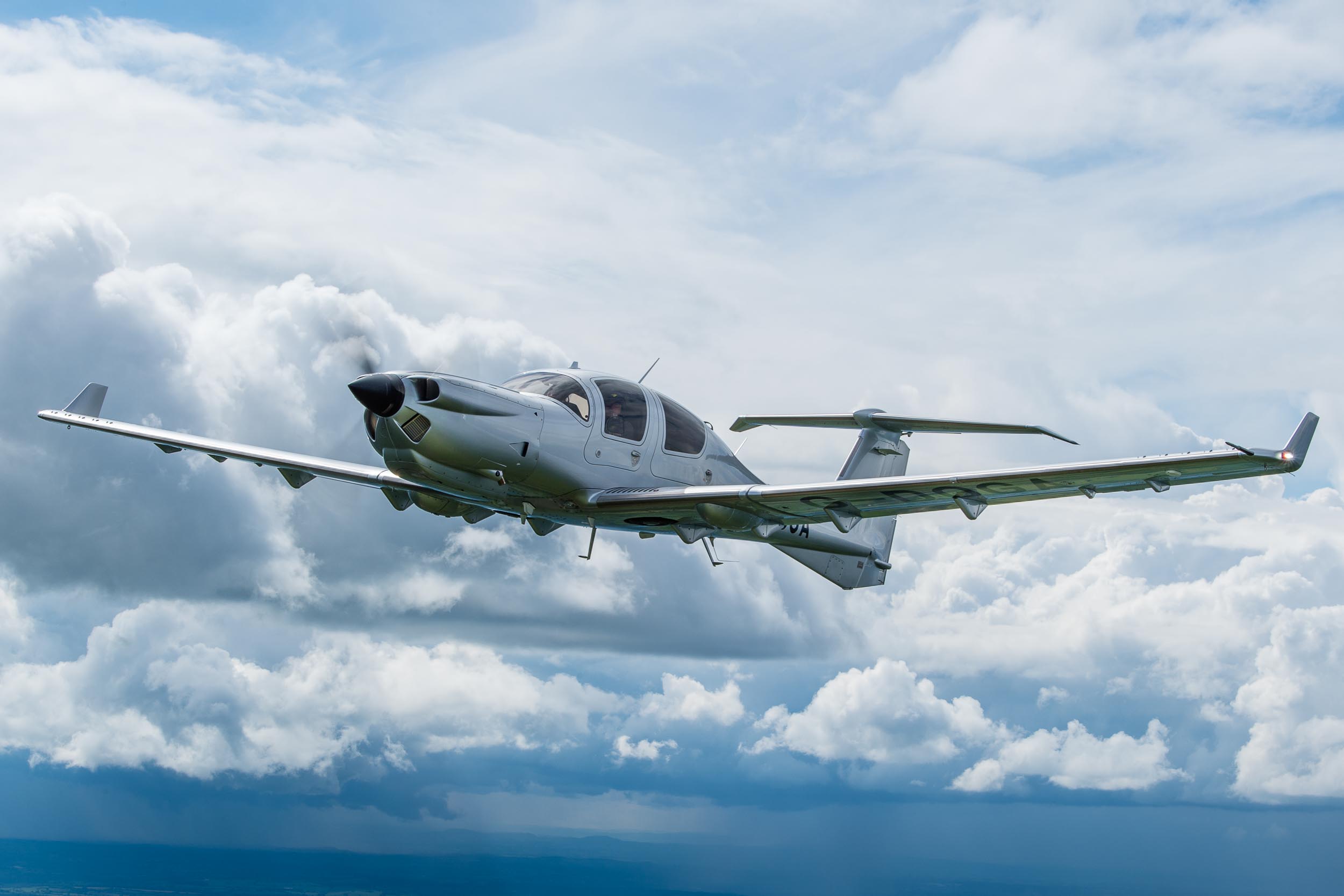 +VIDEO For just north of a million euros, the DA50RG is up against some tough competition, but this big Diamond offers a lot, you just can’t have it all at the same time…

Here’s the bottom line. The DA50 RG is a big aircraft with a superb interior. There’s enough useful load to make use of its five seats, and while its cruise numbers are solid, they’re not class leading and you’ll find yourself swapping speed for range if flying a decent distance into Europe. For just north of a million euros you can’t have it all, or more accurately, you can have it all, just not at the same time…

Nobody at Diamond has ever mentioned it to me, but seeing the success of the Cirrus SR22 must have given a few people at the factory in Wiener Neustadt, Austria some sleepless nights.

For years the company has been working on a big single, running through a whole bunch of power plants along the way. The first prototype broke cover 16 years ago. It was known as the DA50 Magnum and was powered by a 350hp FADEC Continental. The aircraft would be getting a ballistic recovery chute, and would be lightly pressurised. I’m told performance was good, but that it needed an awful lot of avgas to make it fast, and even at 2006 fuel prices that was considered just too punchy.

Then came the DA50 JP7, powered by an Ivchenko turbine. I’m told it was both loud and thirsty, and its targeted 2016 certification date came and went. There was an SMA diesel variant, and a lower powered (175hp, I think) Austro engine variant, which I flew from the factory.

It actually had a half-decent low fuel burn cruise, but had we wanted to carry more than two people or enjoy the comfort of an interior (this was a bare carbon prototype), I think the company would have needed a bigger runway.

After all these options, and probably a few more that we never got to hear about, Diamond settled on the 300hp Continental CD300, a twin turbocharged intercooled V6 that recently had its Time Between Replacement (TBR) increased from 1,200 hours to 2,000 hours, and its gearbox life extended by the addition of on-condition monitoring via a simple oil sample.

Building more than one type of aircraft from as many common parts as possible is a sensible Diamond trait, and the DA50 clearly borrows from the company’s flagship DA62 twin. Most of the fuselage, the wing’s centre section, the retractable landing gear, etc are all common, as is the spacious five-seat cabin. The DA62 has an optional seven-seat configuration, but in the DA50 RG you get a lot of luggage space instead.

We’ve been trying to get our hands on a DA50 RG for a while, but thanks to Covid and varying travel restrictions, we only recently managed to grab a flight in G-DOGA out of Enstone.

If you watched the short video we produced at the Private Flyer event at Wycombe, you’ll know that the DA50 is a very large single. It’s one of those aeroplanes that somehow exudes bigness as you walk around it. Checking the oil is a stretch, you can’t see the tail’s top surface (it stands nearly 10ft high), you take a very definite step up onto the wing, and if the large gull-wing cockpit doors are open, you can’t easily close them without getting onto the wing. There’s just one door at the rear. It’s bigger than the two front doors but it’s also the only way of getting luggage into the rear of the aeroplane (the back seats fold forwards to help).

“Instead of gawping at its size, you begin to notice the quality. The whole well-made and well-thought out thing continues when you close the door. Diamond has it nailed”

Once you’ve spent a bit of time in the aeroplane’s company, its presence kind of retreats a bit (don’t be fooled, you might have to get its 44ft wingspan into a hangar). Now, instead of gawping at its size, you begin to notice the quality. Climbing onto the wing you’ll find hand-holds in the door frame just where you need them. The front of the leather seat flips up to make stepping onto the floor more practical. Everything you touch feels well designed and well made, mechanisms run smoothly, handles look like they’ve been machined from solid billets, and there’s loads and loads of space.

The whole well-made and well-thought out thing continues when you close the door. Diamond has it nailed. The DA50 is positive, precise and proven. You may wonder why so many manufacturers have door closing mechanisms that are put to shame by a badly built Morris Marina. I know I do. In the same vein (although possibly the Marina doesn’t shine quite so much here), there’s the start process, where again Diamond has it nailed. Turn on the engine master, wait for the glow plug light to go out, press the button and the engine fires. Hot, cold or anywhere in-between. Again, why am I even writing this in 2022?

Right, while things warm up let me run through the cockpit environment. Take it as read that there’s lots of space, lots of leather and lots of carbon-fibre looking trim. There are some seat comfort adjustments but not really any movement, so you need to adjust the rudder pedals by motoring them into a position that matches your leg length.

Control is via a stick to which is added an elevator trim switch, PTT, autopilot disconnect and control wheel steering buttons. On the centre console there’s a throttle (the rudder trim is on the back of this, go-around button on the side), and small levers for the parking brake and cowl flaps. There’s a huge manual trim wheel. In some versions there’s a control head for Garmin’s G1000NXi that flips out from the central arm rest. The panel is dominated by the two Garmin screens, but once you add in standby instruments, environmental controls, flaps and gear, engine switches and a swathe of circuit breakers you’re left with one busy looking panel. I’m definitely in the less is more camp here. Engine checks are all about button pushing, and with all being well it’s time to go.

The nosewheel is free-castering through a range of about 80°, and it takes a good prod of brake and maybe a bit of power to get things turning. I would not describe the steering as light, but that really only gets in the way if you are taxying and parking rather than during take-off or landing.

Talking of take-off, for a 300hp engine at max power the acceleration is more persistent than surprising. I’d estimate that I rotated after about 300 metres, but looking through the Pilot’s Operating Handbook you can expect a ground roll of between 260m and 420m depending on weight (on a hard runway with no wind). All power settings are done by reference to a percentage value, and while full power is used for take-off, the climb is usually done at the maximum continuous power (MCP) of 90%. Depending on weights and outside air temps, you should see between about 700fpm and 1,000fpm – not the strongest initial climber but the twin turbocharged engine will take you from sea level to FL160 in just over 20 minutes at max weight (the built-in oxygen supply will come in handy here!).

We stayed at around 3,000ft where we saw 154kt TAS for a fuel burn of just under 12 usg/hour (about 45 litres) which, given the UK price for Jet A, makes for some pretty economical high-performance touring. Going faster or slower will of course change your fuel consumption. If you really are in a hurry the 90% MCP will get you there faster, but you’ll need to burn another three or more gallons an hour. Conversely, if there’s no rush, you can pull the power all the way back to about 45% which will get you around 120kt, but it’ll also knock a third off your fuel consumption. There’s a big difference between a DA50 in a hurry and a DA50 floating along with time to spare. Potential buyers should find a quiet room and a copy of the POH performance tables to run through the options.

Talking of options, there’s quite a few when it comes to weight and balance. Roughly speaking (individual aeroplanes will vary), the DA50 RG will have about 560kg of useful load. If you fill the tanks (195 litres with 185 of them usable) you’ll have something just over 400kg to play with for your five seats and luggage. It’s definitely not an ‘if it fits it flies’ aeroplane, particularly if you take full advantage of the 90kg luggage limit, but there’s plenty of options for juggling fuel, baggage and passengers.

I digress. Back to cruising at 3,000ft or so… with the aeroplane set for what felt like a good compromise of speed and fuel burn we did a bit of general handling. The ailerons are on the heavy side, it’s a bit lighter in pitch and the rudder, of which plenty is needed, was being taken care of by the yaw damper which had gone on earlier in the climb.

The DA50 is very stable and makes excellent use of Diamond’s superb wing. Demo pilot David had me slow the aeroplane down, trim all the way back and hold the stick on the aft stop. With gear and full flap selected we were stalled at an indicated 60kt and a descent rate of 600fpm. We still had aileron authority for very shallow turns but the aeroplane just sat there. I’m told the factory is teaching this as the procedure for engine failure in IMC (just like the AN-2).

Heading back for a couple of landings, speed control is pretty straightforward thanks to the retractable gear and the three-position hinged, double-slotted flaps. My first landing enjoyed a small bounce, the second was smoother. In terms of landing performance, you’re going to need between 640m and 690m once you’ve passed that imaginary 50ft obstacle on final, and a bit more than that to take off again (always assuming you have that obstacle in your way…).

To add to the conclusion with which I started. The DA50 RG has the best interior of any single engine GA piston aircraft that I’ve flown, and G-DOGA wasn’t even fitted with all of the options (air conditioning, flip up Garmin control head etc.). It’s probably got the best wing in the business and it’s fitted with one of the most modern piston engines out there. But the 300hp available is driving a big aeroplane with a MAUW of 1,999kg (just under the threshold for Eurocontrol route charges). If you are looking for the best possible speed you are going to have to climb high and burn quite a lot of fuel.

A decently equipped DA50 RG will likely cost you a bit over €1,000,000. At that price there’s some tough competition. Personally, were I in the buying seat (sadly I’m not), I think I’d take another look down the back of the sofa and see if I couldn’t find some extra change to buy myself a DA62! 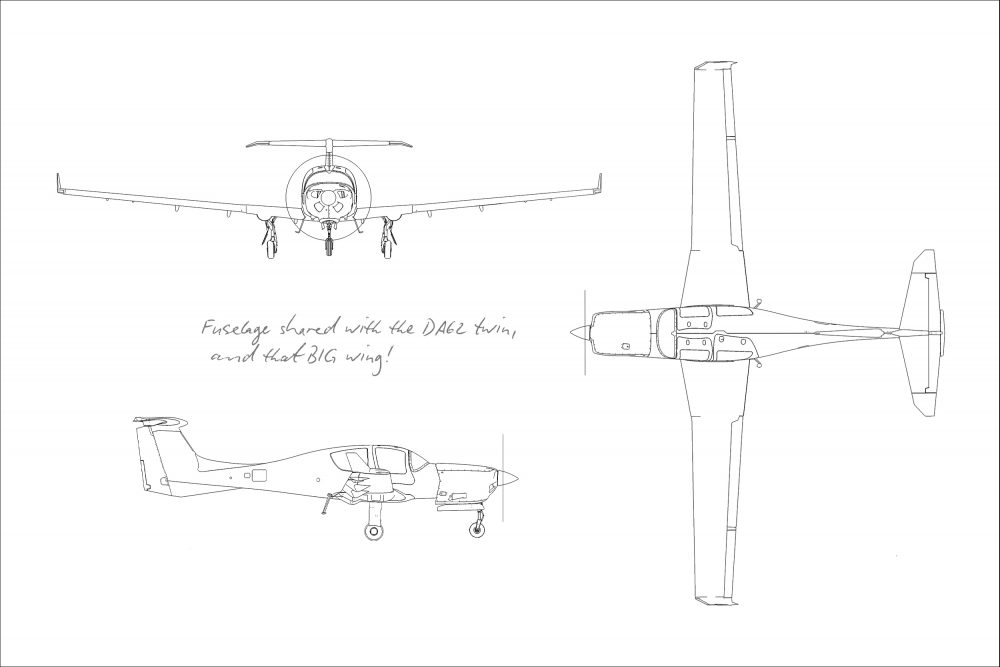 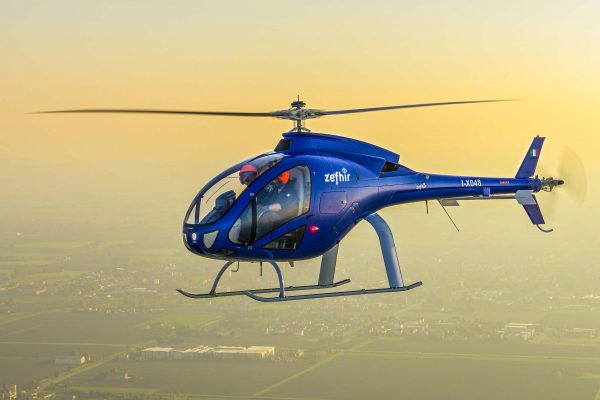 In Italy’s Motor Valley, Curti Aerospace has been busy creating a very special little helicopter, the 600kg Zefhir. Rachel Ramsay went to Bologna to fly it 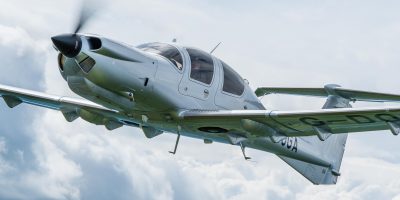 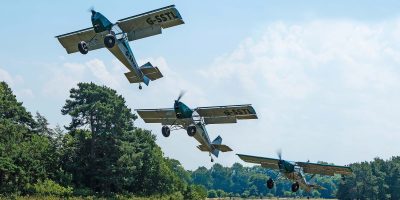 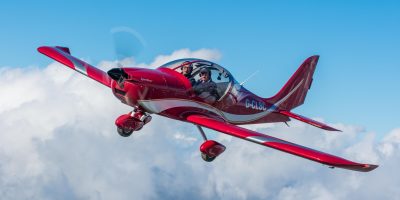