Don’t just rely on having Plan A, B or C up your sleeve to get out of impending trouble. Take it to Plan Z, if need be…

One warm, summer Sunday morning, a friend and I decided we were going to fly from the Continent to Lydd for brunch. We pulled our aircraft, a Cirrus SR20, out of its hangar and started our external pre-flight checks.

All completed, we jumped on board, buckled up and continued the checks before starting the engine. Once it had roared into life, we switched on the radio and even though it was relatively early, we could hear aircraft on frequency reporting… ‘Six minutes away to the east, inbound to land’.

Remembering back to my weather briefing, this was encouraging because the east was showing marginal weather, whereas our direction of departure, to the west, was showing CAVOK.

“Well, if they’re flying in from the east, then the weather is obviously better than forecast – which was a sporadic low cloud between 600 and 2,000ft agl – not overcast, but broken.”

The engine was now warmed up, run up checks were complete, so we now taxied along the line between the two rows of hangars, took a turn to the right, and then followed the taxiway to the holding point of Runway 06.

Before take-off checks – all looking good, transponder to ALT, checked the view out onto final – nothing coming – so reported entering the runway to take-off, and advanced the throttles, made a turn onto the active runway and, once lined up, smoothly and steadily advanced the throttles to full.

The six-cylinder engine, previously burbling nicely, accelerated loudly and began to power us down the runway. Check T&Ps – all good. RPM? 2,700rpm. Good. Airspeed? Alive… 65kt, 70kt, 75kt. Rotate. I pulled back on the side yoke and the aeroplane leapt into the air – the joys of flying. And 200ft airfield elevation soon became 400ft, then 600ft, then 700ft.

Looking back, I still can’t remember why I didn’t notice what was happening ahead, all I recall is suddenly entering the clouds. Thick clouds.

OK, I thought. I have a plan for this. I’d preset the heading bug on the autopilot to runway heading, reached down, pressed HDG and VS, dialing in +600fpm to climb on top of the layer.

The nose suddenly pointed down. I’m now descending OUT of the clouds, at 600ft msl, 400ft agl.

No time for hesitation, no time for considering “…what’s George doing now”, I clicked off the autopilot and levelled off at 600ft MSL, just below the clouds, when suddenly I was back in the clouds again.

“I still can’t remember why I didn’t notice what was happening ahead, all I recall is suddenly entering the clouds. Thick clouds”

Once more, I reached for my ‘get out of jail card’. Again, checked HDG, VS +6, but once more the aeroplane moved the nose down and we started to descend.

Once more, I clicked the red button to put George back in his box. OK, wings level, you can do this, I thought.

Don’t turn, keep on track when suddenly a horrendous realisation crept into my conscious thoughts. Just ahead of me is a group of wind turbines, all at least 500ft agl.

If I don’t climb, I risk wrapping myself around one of them.

My flying buddy was looking extremely anxious at this point, I looked across and said, “We’re going to have to climb through this, no other way.”

I gently pulled the aeroplane’s nose up and trimmed it for 95kt, keeping the wings level.

More than three minutes passed as I kept my eyes glued to the artificial horizon, ensuring we remained wings level as we climbed through the low cloud.

At 2,200ft msl we broke out into the bright sunlight and both of us gave an audible sigh of relief.

I gave the departure aerodrome a call and warned them of the conditions sitting directly at the end of final 06, just in case someone else was looking to depart, to warn them of the dangers lurking.

Two aircraft had called joining downwind, the first had already turned final but called back that there were no issues flying in and onto 06.

I then made a turn to the north-west, to head to the nearest international airport in order to clear passport control (even then in pre-Brexit days a requirement when flying between the UK and the Continent).

As was forecast, the weather there was CAVOK, we landed, had our passports checked, activated our flight plans and set off.

Only this time when I activated George, he did what I requested. It was the one and only time he didn’t perform as requested, to this day I don’t understand why…

My learnings from that day:

If you’ve had an incident which sounds like That Worst Day, write about 900 words describing what happened and send it to the editor, [email protected] 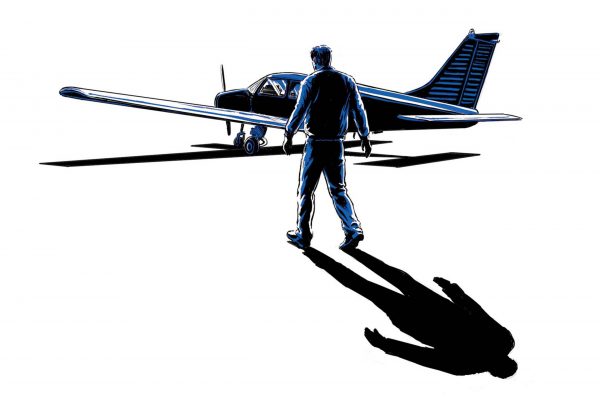 Don’t just rely on having Plan A, B, C or D up your sleeve…